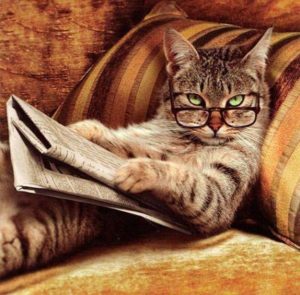 Meowing is not a natural part of cat communication. It was something developed just to communicate with humans. They learned a way to get our attention – and it certainly works.

Kittens are born without any teeth. 26 teeth will begin to grow in at around 2-6 weeks, but will start to fall out at 11 weeks. They mostly swallow them, but you find some on the floor too. By 4-6 months of age the adult teeth start growing in and there will be will be 30 teeth in total.

Cats can be allergic to us – with more cats being kept indoors, kitty asthma is on the rise. Allergens can include smoke, dust and human dandruff. Symptoms, as you probably would guess, include lots of sneezing.

Tortoiseshell colored cats are (almost) always female. A rare male was reported in Britain with the odds being 1 in 400,000 of this happening.

There are more pet cats than pet dogs in the U.S. Even though a higher number of households have dogs, there are more cats being kept as pets making their total number higher. (94.2 million cats vs. 89.7 million dogs according to a survey by APPA in 2018 provided by the Humane Society of the U.S.)

Cats can see in color, but the only colors they are believed to see are blue and green. Keep that in mind when picking out cat toys. Now you know why these are the Pawsitive Potential logo colors!

Not all cats will react to catnip. It’s an inherited trait and approximately half of cats respond to it. If both parents are sensitive to it, then odds are more than 75% likely their kittens will be sensitive too. It doesn’t begin at birth and takes about three to six months to start seeing a reaction. Lions and other big cats can respond to it too!

Cats have a very interesting way of drinking water. They don’t scoop it up with their tongues like dogs do, but rather just touch their tongues to the surface. They move their tongues up and down so quickly that inertia is created and the water moves into their mouths. Lions and other large cats do the same thing.

Cats have about 24 whiskers. 12 on each side. They are highly sensitive and should never be cut.

One litter of kittens can have multiple fathers – as many as five or more! That’s why one litter can have such a variety of colors, patterns and personalities.

Why do cats sometimes run out of the litter box after using it? There are different theories, but the Chewy.com blog pages have quoted my opinion on this subject that you can read here.

The lifespan of a cat living outdoors is about 3-5 years. For cats living indoors only, they can be expected to live 16 years or more.

The rough tongue of cats allows them to proper groom themselves and also clean off more meat from the bones of prey after hunting.

Remote and In-Home consultations available throughout Long Island and parts of New York City. Please call for other locations.